So, You have heard about remapping,

A friend has had their car remapped, but your not sure what it is, or how it works. Do you need it?

Well in most cases we can improve the Power, Economy and Torque of your engine.

We can also tailor the Mapping to suit your Engine Modifications, often best done "live"

In order to grasp the concept of what is involved in remapping, fundamentally you dont need to be mechancally minded, as long as you understand a few measurements, we can get you follow how a remap works by explaining it in a slightly different way to most people. In this instance we are going to concentrate on a very simple  Turbocharged Petrol car with a Speed Density fuel map.

What do i need to understand?

"Think of the ECU as a calculator, The Injection and spark components are asking a question, and the ECU is giving the answer."

You need to understand that this engine is running from an ECU, loaded with potentially hundered of maps, we are looking at only one, on a very simple system to allow you to understand how it works.

Engine speed measured in Revolutions Per Minute, as the engine rotates we measure its speed in RPM, its as simple as watching your rev counter climb as you hit the throttle.

The figure given to measure the pressure in the Inlet Manifold, read by the MAP Sensor. Simply how much pressure is in the inlet pumping into the engine. Often measured in KPA (Kilopascal)

So with these two measurements we are able to make a table. RPM referenced up one side of the table, Boost Pressure on the other. 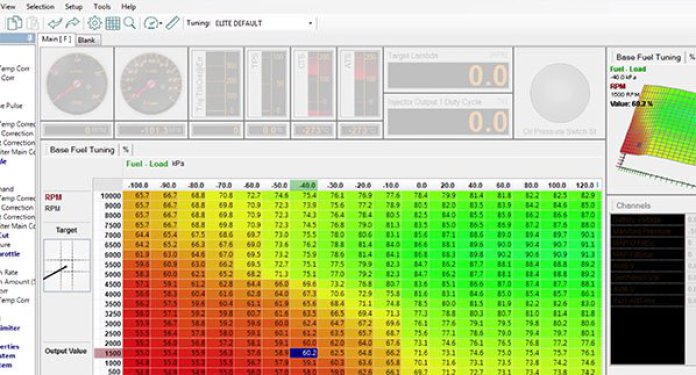 Ok, So above is a simple RPM vs Boost Fuel Map.

Ignore the data in the table for the time, just look at the Axis,

So pretty much as we described earlier.

The figures in the Axis are not importand right now, but these are known as breakpoints. As long as they are scaled and you understand what they represent, you will get the idea.

The individual cells in this map are known load sites.

See the Blue highlited load site? if we were live mapping the car, this box would indicate exactly where the ECU is looking for its answer to the question its asking.

This blue load site will move about, as the RPM and Boost pressure change, so the answer the ECU gets given each question can always have the correct answer!

So mapping, what is it?

We change the answer to the ECUs question. So we can add more fuel, Less Fuel, We can change the breakpoints to allow different scales to be used, more boost to be used and measured.

Is it that simple?

The process of changing the answer remains, but the maps become very complex, there can be hundreds if not thousands of maps in a modern ECU controlling everything from Fuel as you see here, (there can be 10s of fuel maps alone)  right though to how much volume increase you get on the car stereo as you speed up.

And nobody will tell you where these maps are or what they do. This part of the job is best left to programmers and people who can reverse enginer the ECU calibrations.

It can take literally 10s of hours just to open and look at all these maps let alone configure, modify, test, and make software to allow you to simply open a Fuel table as we have here.

OBD Remapping What does that mean? and whats"Chipping"?

At the end of the day the ECU is holding data, in order to modify this data to get the results we want we need to read this from the ECU, modify it, and re program it.

So this can be done of most modern cars Via the OBD (On Board Diagnostic) Port, we can attach equipment which will force the ECU to pump its software to us, we can then capture this information, find, re calibrate the maps, then re write the new version of the software back into the ECU. Think of it as updating Windows on your PC.

Chipping, ultimatley the same process, but older ECUs stored the data on a removable EPROM, which we remove, read, and then reprogram with the new software.

We have various sources for our Remaps, as we have been in this industry many years we know the "go to" People for good quality.

We have the ability to do the files ourselves, but i feel its often best to use a trusted source and work in colaboration with someone doing programming all day long, the time it takes me to do it is very hard to justify.

We can give the calibrator feed back, using our own experience, and get the maps trimmed and adjusted to suit our own very specific needs.

We do however do our own Live mapping on Weber and ECUs of that type.

I hope we stand out from the others, as we genuinly do care about how our remaps drive, we work extremly hard to ensure they are right every time.

Making a car fast is the easy bit.

The difficult part is improving its drivability, cold start, fuel economy, idle, these are the parts that take the time and at the end of the day these are the areas you will be driving through everyday.

So the next time you see somebody selling a remap based on its amazing claimed power figures, Think twice!

You can find out more about our own Remaps HERE