At Auto Dynamix we specialise in the removal and extraction of carbon deposits in the modern engine.

Modern engines are very complex which is why many garages will not offer this type of service.

What is Carbon Build up?

Carbon build up has been an issue on all combustion engines since they were invented, but where the process used to be a down to inner cylinder carbon, with engines needing a "decoke" the modern combustion engine takes carbon to a whole new level.

The day to day driver may have never known they had any issues, with the Decoke often being done by those tuning and wanting nothing but performance from their engine so it really came down to choice and was often described as a little bit of a myth that it even gave any benifits at all.

Most modern Petrol engines, and pretty much all Diesel engines are now direct injection, which although great for effieciency and economy  it does cause an underlying issue with carbon build and up in the inlet ports.

Its now classed as a service item from most main dealers who build carbon removal into service schemes, becuase its a known fact they will need this service during the life of the engine at regular intervals.

As no fuel is flowing through the inlet to keep it clean from the injectors, all direct injection engines will sooner or later have restriced inlet ports, poor running, low power caused by carbon build up. 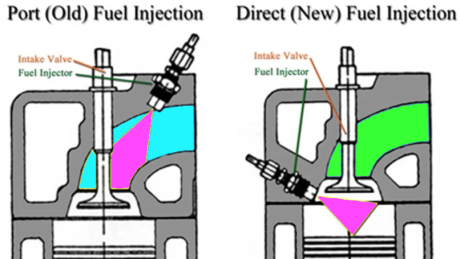 The picture above is a great way to show how modern direct engines build up carbon, as you can see there is nothing to keep the inlets clean any more,

The green area is where the carbon will build up.

You can see the pink fuel is no longer directed through the inlet to wash it clean.

What is carbon and why is it there?

As the engine breather systems still vent into the inlet, They have to do this for emisions reasons to meet type aproval,  the oil vapours burn themselves onto the hot inlet walls, becoming carbon deposits. There is very little you can do to prevent it.

Over time this builds up, on Diesel cars the EGR valves pumps dead exhaust gas into the inlet, mix this exhaust gas with the oil from breathers and it becomes a thick sticky black mass of carbon, which grows rapidy.

What about other types of Carbon Cleaning?

We are of the opinion, from experience, that there is no magic cure to remove carbon.

There are "wet" cleans on the market, some garages or mobile services will offer a few versions of these where they flush the inlet tracts with cleaning solution. Ask yourself this, Where is that carbon going to go?

It cannot magically disapear! if you are lucky the carbon will go through the combustion chamber and land in the exhaust or DPF, having been though the turbo before hand!,

But if you are unlucky as lots are, a lump of carbon will fall off the wall of the inlet, get trapped behind an inlet valve preventing the valve from closing, then Mr piston comes up on its firing stroke and bangs the valve shut causing valve damage and catastrophic engine damage.

Be VERY carefull! this is why we advise the Walnut Blasting where the carbon is actually removed the way it came in, not pumped through the engine.

When do i need to do this?

Its a fact that if you own a direct injection engine you WILL have carbon deposits in the inlet, and it WILL cause you issues.

The way to remove this carbon, is remove the inlet, and fire high speed crushed walnut shell in to the port using special tooling.

We advise this is carried out between 50-60k miles.

This is a process we can carry out in house.

We have a page in our webshop showing drive in drive out prices for the most common engines we do. This selection is growing rapidly